Overnight trade has SRW Wheat up roughly 3 cents, HRW up 3; HRS Wheat up 5, Corn is up 3 cents; Soybeans up 3;  Soymeal unchanged, and Soyoil up 15 points.

U.S. Weather Forecast: The 6 to 10 day forecast for the Midwest has differences between the models. The GFS is mainly dry for the region with some light showers for northern IL, most of IN  and OH while, the European model has a cold front Sunday bringing moderate rainfall for eastern IA, most of MO and most areas east of the MS River. Temps run near average until the middle of the week before falling to below average the remainder of this week, weekend, and first half of next.  The Southern Plains over the 6 to 10 day period has little to no rains over the 6 to 10 day period. Temps are above average for most of the week before falling to below average for the upcoming weekend and early next week.

South America Weather Forecast: The Brazilian growing regions has hit and miss showers for the week ahead central and up on north with up to 70% coverage. Rains central/south look to be light with 75% coverage. The 6 to 10 day has rainfall continuing in the north with around 80% coverage.  The Argentine growing regions has rainfall this week in the northeast this week with the rest of the growing areas dry. The 6 to 10 day has light to moderate rainfall with coverage up to 90%.

Europe/Black Sea Region Forecast: Central and Eastern Europe rainfall will be abundant to excessive this week. There is some potential for increased shower activity in eastern Ukraine and a part of Russia’s Southern Region during the October 18-25 period.

Wheat prices have hit their highest level in over five years in reaction to scorching weather, concerns over food insecurity brought on by the coronavirus pandemic and the lockdowns put in place to fight it; extreme dryness and heat in the world’s breadbaskets, including Russia and the U.S. are key factors in the price surge; the virus has driven strong demand for basic foodstuffs as well as posing logistical challenges to harvests and snarling supply chains; on Friday, the Norwegian Nobel Committee awarded the 2020 Nobel Peace Prize to the United Nations World Food Program, noting the pandemic’s impact on food insecurity and the body’s work to alleviate it. 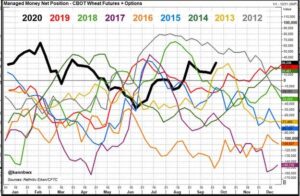 Wire story reports It was a forgone conclusion that speculators easily held a record bullish position in Chicago-traded soybeans ahead of the U.S. government’s latest supply and demand report, but funds’ actual buying in the latest week was extremely underwhelming given the surge in futures; the U.S. Department of Agriculture on Friday projected much tighter domestic and international soybean supplies than analysts predicted, sending futures close to four-year highs and again setting the expectation that funds closed the week on a record long note.

China’s agriculture ministry confirmed on Friday African Swine Fever in piglets illegally transported to the southwestern city of Chongqing, the first reported outbreak since July 25; the Chongqing Animal Disease Prevention and Control Center seized 70 piglets of which two were dead and 14 were ill, the Ministry of Agriculture and Rural Affairs said in a statement.

Brazilian President Jair Bolsonaro said that he plans to meet with local soy farmers next week to discuss a rise in prices of the nation’s most prized export commodity;  Chicago Board of Trade soybean futures soared to their highest prices since March 2018 on Friday, after the U.S. Department of Agriculture projected tighter domestic supplies; in Brazil, the price of soy for shipping out of the port of Paranaguá reached a record high of 159.22 reais ($28.78) per bag this week amid a drought in the beginning of the planting season and a weak currency.

Current dry weather may reduce Russia’s winter wheat sowing area by 10-15%, mainly in the central part of the country, the Sovecon agriculture consultancy said; farmers in Russia and its peer Ukraine have been sowing winter wheat amid dry weather this year, which means higher risks for the 2021 crop.

Russia’s September exports of wheat, barley and maize (corn) are estimated at 5.65 million tons, up from 5.11 million tons in August, the SovEcon agriculture consultancy said.

High demand from importers and worries over delay in winter wheat sowing campaign have pushed Ukraine’s milling wheat export prices to two seasons’ high of $244-$247 per ton at the end of last week, APK-Inform agriculture consultancy said; Ukrainian 12.5% protein Black Sea wheat prices added $6-$7 a ton over the past week; for the lower-quality 11.5% protein wheat, prices were between $242 and $245 a ton FOB Black Sea.

Ukrainian sunflower oil export prices leapt $80-$90 per ton over the last week due to stable demand from importers and a lack of offers from producers, consultancy APK-Inform said; bid-ask sunoil export prices rose to $955-$990 per ton FOB (free on board) Black Sea for October-November delivery; the economy ministry of Ukraine, the world’s largest sunoil exporter, said last month the country’s 2020 sunseed production could fall by 8.5% to 14 million tons from 15.3 million tons in 2019; some analysts see the harvest at around 12.5 million tons

Wheat and barley sowing is underway in France, with farmers facing frequent showers that have raised concern about a repeat of last year’s campaign that saw torrential rain slash the crop area in the European Union’s biggest grain grower; for soft wheat, France’s main cereal crop, farmers had sown 6% of the expected area for next year’s harvest as of Oct. 5, farm office FranceAgriMer said; that compared with 3% a week earlier and also 3% in the corresponding week last year, it said in a weekly cereal crop report containing its first sowing estimates for the season; but this year’s wheat sowing progress was slightly below the average of the past five years.

Britain’s wheat imports rose sharply in August and are running well ahead of last season’s pace, customs data showed; wheat imports for the month totaled 217,894 tons, up from 149,337 tons in July; Bulgaria was the largest supplier in August, shipping 63,225 tons, followed by Germany with 57,912 tons; cumulative imports since the start of the 2020/21 season, which started on July 1, totaled 367,231 tons, up from 223,293 tons in the same period a year earlier.