Overnight trade has SRW Wheat up roughly 8 cents, HRW up 9; HRS Wheat up 5, Corn is unchanged; Soybeans down 1;  Soymeal down $1.00, and Soyoil unchanged.

U.S. Weather Forecast: The 6 to 10 day forecast for the Midwest has dry weather continuing through the upcoming weekend with a front moving in next Monday bringing light to moderate rainfall with 90% coverage for the region. Temps run below average for the next couple of days moving up to average by the end of the week and above average the first half of next week. The Southern Plains over the 6 to 10 day period has a front bringing light to moderate rainfall to the eastern sections of the region at the start of next week. Temps run above average over the next 10 days.

South America Weather Forecast: The Brazilian growing regions has little rainfall for most areas except for central/east (light amounts for northern Rio Grande do Sul, Santa Catarina, and southern Parana) over the next 10 day period. Rains do look to develop north of Parana bringing moderate amounts from the weekend into early next week. The Argentine growing regions has mostly dry weather over the next 10 days.

Europe/Black Sea Region Forecast: Europe will continue to experience waves of rain over the next two weeks, but the intensity in western areas will be much less than that of this past weekend. Russia’s Southern Region is still advertised to be mostly dry for the next ten days, but some showers will be possible October 15-22; most of the region was dry during the weekend and very little precipitation was expected in the next week to ten days. Ukraine and portions of southeastern Europe will receive waves of rain later this week through most of next week; sufficient rain will fall to relieve some of the driest areas from dryness; rainfall of 0.75 to 2.50 inches and local totals over 4.00 inches may occur by the end of next week; temperatures will be warmer than usual in much of the forecast period. 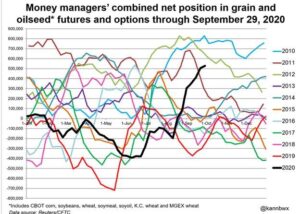 China may fall short of annual agricultural product purchasing commitments made in its Phase 1 trade deal with the United States due to “non-agricultural trade issues,” U.S. Department of Agriculture Secretary Sonny Perdue said; I’m not sure they’re going to make it, but they’re trying,” Perdue said; China committed to importing $36.5 billion in U.S. farm products this year in the trade deal signed in January, but lagging purchases during the first half of the year cast doubt on the goal of increasing imports by more than 50% over 2017 levels; Chinese imports of U.S. agricultural products totaled just $8.6 billion from January through July, according to the latest U.S. Census trade data.

Private analytics firm IHS Markit Agribusiness, formerly known as IEG Vantage, on Friday cut its forecast of the average U.S. 2020 corn yield to 177.8 bushels per acre, from 178.1 a month ago; the firm estimated U.S. corn production at 14.812 billion bushels, compared with its Sept. 4 figure of 14.961 billion.

Chicago-traded grain and oilseed futures had eased in the days leading up to Wednesday’s wildly bullish stocks report from the U.S. government, but that did not stop speculators from stuffing their portfolios even fuller with corn and soybeans.

Alberta crop report: Warm, dry weather last week allowed Alberta producers to make considerable harvest progress; provincially, producers were able to harvest a further 23 per cent of the crops, bringing the total progress to 68 per cent complete, 22 per cent ahead of the previous five-year average.

China has never before ordered so much corn from the U.S., and imports next year might beat forecasts, Commerzbank says; China’s role in the corn market is in no way comparable with its exposed position in the soybean market; but it adds the U.S Department of Agriculture’s forecasts that China will import 7 million metric tons of corn in 2019-2020 and 2020-2021 each could be too low because China has already ordered so much in the U.S.–over 9.3 million tons is planned for shipment in 2020-2021.

Only 1.7% of the projected 2020/21 soy area in Mato Grosso, Brazil’s largest soy producing state, has been planted, according to data released by industry body Imea on Friday, indicating that dry weather is significantly affecting the area’s soy crop; last year, 6.65% of the area had been planted by Oct. 4; over the last five years, an average of 9.59% of the state’s soy area had been planted by that time.

Argentina’s main farm association said that government measures to temporarily cut export taxes on grains were inadequate and failed to address issues facing local farmers amid a grave economic crisis and strict capital controls; the center-left government said on Thursday it would cut the export levy on soybeans by 3 percentage points to 30% to stimulate sales and bring in much-needed foreign currency; the levy would rise again to 33% by January; soymeal and soy oil levies would be cut further to various levels, also rising again incrementally in coming months; farmers in Argentina have held back on selling their soy harvests, a concern for the government as foreign currency reserves dwindle amid the coronavirus pandemic; there is also low confidence in the peso as the country heads for its third straight year of recession.

Russia could provide details in the middle of this month on a possible grain export quota for the first half of next year, agriculture consultancy Sovecon said; Russia applied a grain export quota mechanism in April-June to ensure domestic supplies during the COVID-19 pandemic; the agriculture ministry said that the system remains relevant despite a large crop, but did not say if it would be reintroduced.

Ukraine has harvested 39.9 million tons of grain from 10.8 million hectares, or 70 percent of the sown area, Ukraine’s economy ministry said; it said farmers had completed wheat and barley harvest and collected 4.47 million tons of corn from 996,000 hectares, or 18% of fields planted with this crop.

Farmers in Kazakhstan have threshed 19.976 million tons of grains and pulses as of Oct.5, with harvesting 99.5% complete, the Central Asian nation’s agriculture ministry said; on the same date last year, harvesting was only 87.4 complete with 15.091 million tons threshed amid lower average crop yields and poor weather conditions.

Early autumn showers in Europe should boost growth of rapeseed crops but have come too late to prevent an area decline in France where drought disrupted late-summer sowing; the European Union and Britain have seen production of rapeseed, their most common oilseed crop, wane in the past two years due to adverse weather and insect problems.

Consultancy Strategie Grains expects the sown area for the 2021 rapeseed crop in the European Union and Britain to be down slightly compared with this year’s harvest, it said; European farmers again faced dry sowing conditions during the late-summer planting window for rapeseed, particularly in France; in a monthly oilseed report, Strategie Grains’ estimate of this year’s weather-hit rapeseed production in the EU plus Britain was left unchanged at 17.1 million tons, slightly below the estimate of 17.3 million tons for the 2019 crop; for EU and British imports, the consultancy increased its forecast for the 2020/21 season to a record 6.3 million tons, up from the 6.2 million tons projected a month ago.

This year’s French grain maize harvest was 32% complete as of Sept. 28, compared with 15% a week earlier, farm office FranceAgriMer said; the office estimated that 58% of grain maize crops were in good or excellent condition, unchanged from the previous week.

Selected highlights from a report issued by a U.S. Department of Agriculture attache in Kuala Lumpur:

Post’s MY 2020/21 CPO (crude palm oil) production forecast has been adjusted down 1 million MT (metric tons) to 19.7 million MT; this significant decrease (compared to the June 30, 2020 quarterly report) is based on an expectation of continued COVID-19 related industry disruption and labor shortage as result of the Government of Malaysian (GOM) closing the border with Indonesia until at least the end of the calendar year; in a recent meeting with the Ministry of Plantation Industries and Commodities, industry experts confirmed the border closing is expected to have a negative impact on palm oil production through at least the first quarter of MY 2020/21, as foreign workers (which make up more than 75 percent of the total palm oil labor force) are allowed to leave the country but cannot return until the border officially reopens.