U.S. soybean crushings likely dropped in September to the lowest monthly level in a year, while soyoil stocks fell to a 13-month low.

NOPA members, which handle about 95% of all soybeans crushed in the United States, likely crushed 160.795 million bushels of soybeans last month.

The monthly NOPA report is scheduled for release at 11 a.m. CDT

Wire story reports not long ago it seemed that the United States had semi-permanently buried itself in soybeans, the main catalyst being damaged export demand to top customer China. And more recently, it was almost certain U.S. corn inventories were quickly running away to multi-decade highs; but now, soybean supplies over the next year are seen dwindling to five-year lows, while corn stocks are slated to be on par with the last few years instead of surging more than 50% higher. 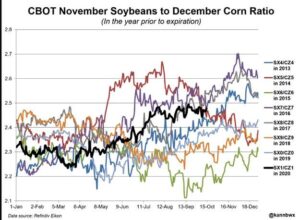 China’s corn futures hit a record high on Wednesday as investors bet on higher prices for the grain because of crop damage from typhoons this year and due to Beijing’s efforts in years past to whittle down its once-mammoth state reserves; the milestone came as China bought another 420,000 tons of U.S. corn, adding to record purchases topping more than 12 million tons this year, according to the U.S. Department of Agriculture; the most actively traded corn futures on Dalian Commodity Exchange for delivery in January hit 2,595 yuan ($385.14) per ton, the highest on record.

Brazilian wheat millers association Abitrigo opposes the approval of genetically modified wheat products for sale in Brazil, saying it will make imports of the cereal more costly and impact prices on the domestic market; the statement comes after Argentine authorities approved a new genetically modified wheat that can resist drought and tolerates the herbicide glufosinate sodium.

European wheat prices closed slightly higher on Wednesday after hitting contract highs earlier in the session, in a sign that traders were relieved that Algeria’s latest wheat purchase would not be sourced from the Black Sea region; benchmark December milling wheat closed 0.75 euro higher at 203.50 euros ($239.1) a ton. It had touched a contract high of 204.00 euro in earlier trade.