South America Weather Forecast: Brazil’s bottom line is not bad with most areas getting rain at one time or another and temperatures in a seasonable range.  A general lack of rain in southern Argentina Dec. 14 – 20 will make two weeks without much rain and sufficient warm weather will have topsoil moisture more significantly depleted by the end of the second week stressing crops more seriously than that of this first week. There is a front seen moving  through the northeast  growing region Friday into the weekend.

Speculators shed some more optimism in Chicago-traded grains and oilseeds last week as weather conditions improved for crops in South America, but the selling was much lighter than trade estimates had suggested. 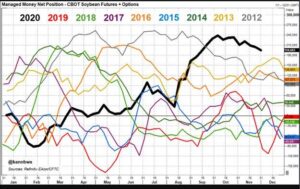 U.S. biomass-based credits traded at a three-year high on Friday, as refiners actively sought to buy them to cover their biofuel blending obligations for the 2019 compliance year, traders said. The buying spree reflected skepticism in the market that either the outgoing Trump administration or the incoming Biden administration would provide any waivers for the obligations, as some facilities have requested. Biomass-based (D4) credits traded at $1.00 each on Friday, up from 95 cents each on Thursday, traders said. The credits have not traded that high since December 2017

The National Corn Growers Association (NCGA) has long sought new and creative ways to build demand for our product. Since 2005, the Renewable Fuel Standard (RFS) has helped to promote both energy independence and a stable, prosperous U.S. economy. The Next Generation Fuels Act (H.R. 8371) is the next step in corn farmers’ efforts to build on the success of the RFS to continue growing the role of low carbon, affordable and renewable ethanol in the fuel supply. Not only does this legislation yield economic benefits for rural America, but it also results in common sense environmental benefits.

Last month’s Economist’s Angle took a deep dive into the Phase One trade agreement with China. It concluded that China’s recent strong export pace would not be large enough to meet the 2020 goal. Even so, the soybean flows to China from the U.S. have been outstanding this fall, especially when considering that China purchased Brazilian beans at such a pace earlier in the year that Brazil has now imported a load of U.S. soybeans to meet domestic demand. The velocity of the imports by China raises questions about the future growth of soybean exports by China. hina’s rise as a major consumer of soybeans is well known, but a few statistics help drive home the magnitude of the transformation. The country consumed 9.7 million tons of soybeans in the 1990/1991 marketing year and USDA forecasts that number will grow to 117.4 million tons in 2020/2021.

China’s soybean imports in November jumped from the previous year, customs data showed on Monday, as cargoes booked from the U.S. following the Phase 1 trade deal cleared customs. China, the world’s top soybean buyer, brought in 9.59 million tonnes, up from 8.28 million tonnes in the same month a year earlier, data from the General Administration of Customs showed, as more American cargoes arrived in the fourth quarter. November imports were also up from 8.7 million tonnes in October.

China imported 775,000 tonnes of meat in November, customs data showed on Monday, slightly up from the prior month as buyers stocked up for the winter months, China’s peak demand season. Imports were up 1.8% from October’s 761,000 tonnes but well below the record of almost 1 million tonnes in July, data from the General Administration of Customs showed.

Behind the walls of a hulking industrial compound in rural China, top pig producer Muyuan Foods is trying to raise more hogs on a single site than any company in the world – a risky investment with deadly African swine fever lingering. The new farm, which began construction in March and started operations at the first of its 21 buildings in September, epitomizes the breakneck pace at which huge, industrialized hog breeding facilities are replacing small, traditional farms, many of which were wiped out by the worst animal disease outbreak in recent history.

China said on Monday it firmly opposes and strongly condemns U.S. interference in its domestic affairs if a media report that Washington is preparing new sanctions on Chinese officials over a Hong Kong crackdown is true. If the United States insists on going down the wrong path, China will continue to take firm counter measures to safeguard its sovereignty and security.

AgRural, a Brazilian agribusiness consultancy, on Friday cut for the third consecutive time its estimate for Brazilian production of corn in the summer, citing dry weather in the nation’s southernmost state of Rio Grande do Sul. AgRural now projects summer corn production in center-south fields to be an estimated 19.4 million tonnes for the 2020/2021 cycle, down from 20.7 million tonnes forecast last month and roughly in line with last season’s 19.7 million tonnes, when dry conditions in Rio Grande do Sul farms also slashed yields and output.

Brazil’s soybean production in the 2020/2021 cycle is expected to jump to a record of 131.79 million tonnes as high prices drove farmers to increase plantings, according to the average of 13 analysts’ estimates polled by Reuters on Friday. This represents a 5.6% rise from what the government says farmers collected last season, which was an estimated 124.8 million tonnes. The poll also shows that a drought reduced expectations for an even bigger crop, as in October the average of analysts’ forecasts showed estimated output this season at 132.25 million tonnes.

A ship carrying 30,500 tonnes of U.S. soybeans was unloading its rare cargo on Friday after getting all regulatory permissions and docking at one of Paranaguá’s berths, according to a spokeswoman for the port authority. Brazil, a net food exporter, sold so much of its soybeans to China, that little was left to process internally during the inter-harvest period. A weak exchange rate contributed to this year’s export bonanza. According to the government, Brazil will collect a total of 105.891 million tonnes of corn in the 2020/2021 cycle

Brazilian soybean farmers have sold 56.5% of their beans in advance through Dec. 4, Safras & Mercado, an agribusiness consultancy, said in a statement on Friday. Considering Brazil is poised to collect 133.517 million tonnes of the oilseeds this season, the volume of pre-sold soy amounts to an estimated 75.403 million tonnes, Safras said. “There were few deals in November, still, pre sales are well above average,” Safras said. At this time last season, forward sales of Brazil’s most prized export commodity represented 37.8% of the estimated crop, according to Safras data. The historical average is 34.5%.

Argentina’s SOEA oilseeds crushers union said its members would end a strike and return to work on Sunday after consultations on Saturday. The union said in a statement he decision had been approved to halt strike action, taken on the demand of a bonus for working during the COVID-19 pandemic, and “operations of each oil company will resume for the San Lorenzo administrative area (a key agro-industrial hub north of Rosario) from the first shift on Sunday.”

Russia’s November exports of wheat, barley and maize (corn) are estimated at 4.73 million tonnes, down from 4.95 million tonnes in October, the SovEcon agriculture consultancy said.

Ukraine has exported 22.12 million tonnes of grain so far in the season, which runs from July 2020 to June 2021, the economy ministry said on Friday; that is 13.5% lower than exports for the same period of the previous season because of lower sales of corn and wheat amid a weaker harvest.

French soft wheat shipments outside the European Union set a new season’s high in November, supported by rebounding exports to Algeria and more large volumes to China, an initial estimate based on Refinitiv data showed. Soft wheat exports to destinations outside the EU totalled 877,000 tonnes in November, the fifth month of the 2020/21 season, the Refinitiv loading data showed.

That was above the 703,000 tonnes recorded in October that had been the highest monthly volume for the season that started in July. China was the largest importer of French soft wheat outside the EU for a second straight month in November, accounting for 331,800 tonnes. Including feed barley and malting barley, a total of 520,000 tonnes of grains was shipped to China from France last month.

Rapeseed production in the European Union and Britain could reach 18.2 million tonnes in 2021/22 in a slight rebound from a very low 17.2 million this year, consultancy Strategie Grains said.

Euronext wheat futures fell for a sixth straight session on Friday, touching a new five-week low, as big Australian and Canadian harvests tempered talk of tightening global supplies. A fresh 2-1/2-year high for the euro against the dollar also maintained pressure on Euronext prices. March milling wheat was down 1.25 euros, or 0.6%, at 202.00 euros ($245.29) a tonne. It earlier reached 201.75 euros, its weakest since Oct. 29, but held above a chart support zone at 200-201.50 euros. The benchmark Paris contract has lost about 10 euros in the past two weeks. Chicago wheat also fell to trade near a two-month low, despite dollar weakness that improved export prospects for U.S. supplies.

Australia upgraded its forecast for agricultural exports for the 2020/21 season as heavy rains boosted production, even as mounting trade tensions with China have hurt demand for several commodities this year. The Australian Bureau of Agricultural and Resource Economics and Sciences (ABARES) said on Monday agricultural exports will total A$49.24 billion ($36.59 billion) for the current season ending at the end of June 2021, up 1% from its previous estimate of A$48.8 billion in September.

Egypt’s strategic reserves of wheat are sufficient to cover the country’s needs for 5.7 months, the supply minister said.

Thousands of Indian farmers angered by farm laws that they say threaten their livelihoods have intensified their protests by blocking highways and camping out on the outskirts of the capital Delhi.

The government of Prime Minister Narendra Modi and leaders of protesting farmers’ unions have held several rounds of talks but have not made any progress in breaking the deadlock over the set of laws passed by parliament in September.