In Brazil, conditions will still be favorable for crop development in most of the nation. There will be some areas that could use greater rain in the first week though. Mato Grosso and northern Mato Grosso do sul into Bahia will be notably drier-biased in week 1 of the outlook with any meaningful moisture being localized. Greater rain is then likely in much of this area in week 2, with the exception of northeastern Bahia, and this will help keep concerns low of notable impacts from dryness. The bottom line is good for crops.

In Argentina, a needed rain event will occur in southern production areas Friday into Saturday. Meaningful moisture is expected which will be beneficial for crops and will at least temporarily reduce the concerns of dryness in the area. Temps run below average.

The U.S. soybean crush in November was likely down from an all-time high in October, although the daily processing pace remained near the highest on record, according to analysts polled ahead of a National Oilseed Processors Association (NOPA) report due on Tuesday.

The monthly NOPA report is scheduled for release at 11 a.m. CST (1700 GMT) on Tuesday. The organization releases crush data on the 15th of each month, or the next business day.

The U.S. Environmental Protection Agency is now aiming for Dec. 31 as the point by which it will propose rules on the amount of biofuels refiners must blend into their fuel mix next year, after missing a deadline last month to release the proposal.

Wire story reports Chicago soybean futures have rallied more than 30% since the start of August and are set to finish the year on the strongest note since 2013, though U.S. farmers in the spring could initiate a price reset similar to 2014 with a boost in plantings. Futures are trading off their $12 per bushel top from late November, though prices are still holding at 4-1/2-year highs with U.S. soybean stockpiles expected to tumble substantially over the next nine months. Tight supplies of soybeans throughout mid-2021 will likely keep old-crop contracts elevated and domestic cash prices firm, but the new-crop prices could come under significant pressure as U.S. farmers are seen increasing acres in the upcoming cycle. 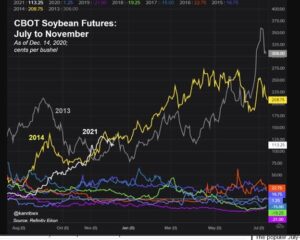 China’s pig and sow herds, ravaged by African swine fever over the past two years, recovered to more than 90% of normal levels by the end of November, the official news agency Xinhua said. Production capacity should fully recover by the first half of next year. Just over a year ago, China’s pig herd had shrunk by 40% ministry data showed, after swine fever devastated farms across the nation. Strong policy support and subsidies launched last year have helped drive a rapid recovery, with the building and stocking of new farms outpacing most expectations. But hog and pork prices are still much higher than usual, and analysts say that although capacity has recovered rapidly, output is still far short of demand.

Brazilian farmers had sown soybeans on 95% of the area forecast to be planted with the crop in the 2020-2021 growing season as of Dec. 10, just slightly behind the 96% that was finished on the same date last year, according to agricultural consultancy AgRural. Dry weather in some soybean-producing areas has been a concern for farmers, but good rains in many areas over the past week came at a good time for recently planted areas and also in areas that were planted earlier. AgRural last week cut its forecast for Brazil’s soybean crop for the 2020-2021 season to 131.6 million metric tons, which would still be record output for the country.

Brazil will likely import larger-than-usual volumes of the oilseeds next year to cater to domestic demand, oilseeds crushers’ association Abiove told a news conference; At the same time, internal demand is heated, Brazil will continue supplying its most prized export commodity to global clients, leaving little to crush internally. Brazil’s 2021 soybean imports will be 800,000 tonnes, up from 500,000 tonnes projected in November, This year, Brazil will likely import 1 million tonnes, an all-time record

This year, Brazil’s end stocks are estimated at 219,000 tonnes and next year they will be 419,000 tonnes, according to the association.

Russian domestic prices for wheat fell sharply at the end of last week as supply rose ahead of a wheat export tax which Russian officials are planning to impose in addition to a grain export quota.

Russia plans to impose a set of measures to slow the rise of domestic food prices, including the wheat export tax of 25 euros ($30.4) for Feb 15-June 30, its government said. Domestic prices for third-class wheat fell by 225 roubles to 15,725 roubles ($215.4) per tonne last week; Russian wheat with 12.5% protein loading from Black Sea ports for supply in December was at $252 a tonne on a free-on-board (FOB) basis at the end of last week, unchanged from the week before. Sovecon said wheat export prices rose by $2 to $257 a tonne.

Russia plans to impose an export tax on wheat, the economy minister told a government meeting on Monday, as part of measures to stabilise rising domestic food prices, which have been criticised by President Vladimir Putin. The export tax will be set at 25 euros ($30.4) a tonne between Feb. 15 and June 30. The export tax will be in addition to a grain export quota of 17.5 million tonnes over the same period.

Russia is considering imposing a sunflower oil export tariff of 15%, but no less than 135 euros per tonne in case of price growth.

Soft wheat exports from the European Union and Britain in the 2020/21 season that started in July had reached 11.61 million tonnes by Dec. 13, official EU data showed; that was 17% below the volume cleared by the same week last year.

Soybean imports into the European Union and Britain in the 2020/21 season that started in July totalled 6.63 million tonnes by Dec. 13, up 3% compared with the same last week last year, official EU data showed

European wheat futures in Paris fell sharply on Monday, following U.S. markets in Chicago lower despite Russia announcing plans for a tax on wheat exports. March milling wheat closed down 4.25 euros, or 2%, at 206.25 euros ($250.70) a tonne. Euronext had hit its highest since Nov. 27 at 211.25 euros on Friday following reports that Russia planned to tax wheat exports.

India’s palm oil imports fell 8% on year in November to their lowest in five months, as a rally in the price of the tropical oil made soyoil more attractive for refiners. The country imported 618,468 tonnes of palm oil in November, down from 672,363 in the same month last year, the Solvent Extractors’ Association of India (SEA) said in a statement. “Palm oil’s discount over soyoil narrowed last month. It made soyoil imports more profitable for refiners. India’s soyoil imports jumped 52% to 250,784 tonnes, while sunflower oil imports dropped 19% to 214,077 tonnes.