Malaysian palm oil prices were up 80 ringgit at 2,989 (basis December) at midsession, an eight month high on increased demand from China ahead of a key festival week.

U.S. Weather Forecast: The 6 to 10 day forecast for the Midwest turned with some differences in the models. The GFS remains dry across the region, the European has light rains for the northeast sections of the Midwest, others remaining dry. Temps run below average but no cold air threats. The 11 to 16 day outlook for the Midwest has below average rainfall and average to above average temps.

The Trump administration is considering at least $300 million in cash aid to U.S. oil refiners that are denied exemptions to U.S. biofuel blending laws for the 2019 compliance year; although the administration has yet to rule on the 2019 waivers, it is considering basing the amount allocated on those who applied for exemptions; the move would aim to help refiners that must comply with U.S. laws requiring they blend biofuels into their fuel mix.

A Farm Futures magazine survey of U.S. planting intentions for 2021 indicated that producers expect to add soybean acres in the coming crop year in response to rising prices, while corn acres should decline slightly. 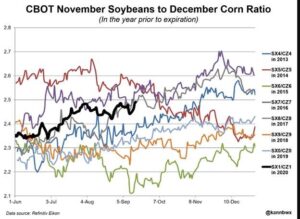 Wire story reported Chicago-traded soybeans have been on an uncharacteristic run over the last several weeks, breaking through double-digit prices for the first time in the U.S.-China trade war era, possibly incentivizing U.S. producers to significantly boost bean plantings next year; the recent rally is unprecedented.

Brazilian farmers in the north and northeast of the country, regions dominated by the Amazon rainforest and Cerrado savanna, are expected to expand their soy fields by more than 6% in the 2020/21 crop season, the fastest rate in four years; separate forecasts from consultancies Arc Mercosul and AgRural show that in percentage terms the regions will be the fastest growing in all of Brazil for soy; both outfits forecast the regions to add more than 350,000 hectares (865,000 acres) this crop season.

Russia has harvested 114.8 million tons of grain before drying and cleaning from 82% of the area with an average yield of 2.93 tons per hectare, data from the agriculture ministry’s analytical centre showed.

Night frosts expected in central, northern and eastern Ukraine this week could present more trouble for winter grain sowing for the 2021 harvest, weather forecasters said; Ukraine is facing the worst weather conditions for winter sowing in at least 10 years because of severe drought across most of the country.

Farm office FranceAgriMer said it expected the average protein content of this year’s French soft wheat harvest to be at 11.6%; in a final estimate for the 2020 soft wheat crop’s quality, based on a survey with crop institute Arvalis, it also pegged the average specific weight at 79.2 kilos per hectolitre.

Farm office FranceAgriMer lowered its forecast of French soft wheat exports outside the European Union in the current 2020/21 season to 6.6 million tons from an initial projection of 7.75 million in July; that would be 51% below a record 13.46 million tones estimated for the 2019/20 season, a figure revised from 13.6 million in July; like other forecasters, FranceAgriMer has been anticipating a steep drop in exports in 2020/21 after France’s wheat crop fell by around a quarter this year due to adverse weather.

Euronext wheat reversed from a two-week low to end higher on Wednesday as traders assessed news that Algeria may be about to open its wheat import tenders to cheaper Black Sea origins; benchmark December milling wheat closed up 1.50 euros, or 0.8%, at 188.25 euros ($222.85) a ton.

Pig prices in Germany have steadied at 1.27 euros a kg this week, despite a series of import bans after a case of African swine fever (ASF) was found in the country, the association of German animal farmers VEZG said; prices had been about 1.47 a kg slaughter weight before the ASF case was confirmed on Thursday, and fell to 1.27 euros a kg on Friday.

Algeria is planning to open up its market to imports of Russian wheat, a French exporters group said, a long-anticipated move that could shake up competition in one of the world’s largest consumers of the grain; the country is changing its import terms to allow the shipment of wheat of Black Sea origin, including Russian and Ukrainian grain.