The monthly NOPA report is scheduled for release at 11 a.m. CDT. The U.S. soybean crush likely declined in August from a four-month high the previous month.

NOPA members, which handle about 95% of all soybeans crushed in the United States, likely crushed 169.468 million bushels of soybeans last month; if realized, it would be down 1.9% from July’s crush of 172.794 million bushels but up 0.8% from a year earlier when NOPA members processed 168.085 million bushels, which was the largest August crush on record; crush estimates ranged from 162.998 million to 173.000 million bushels.

Malaysian palm oil prices were up 26 ringgit at 2,918 (basis November) at midsession looking for higher export forecasts for September.

U.S. Weather Forecast: The 6 to 10 day forecast for the Midwest has dry weather through the weekend before a front moves in bringing light to moderate rainfall mainly for the middle/northern sections of the region early next week. Temps are seen running below average. The 11 to 16 day outlook for the Midwest has below average rainfall and average to above average temps. 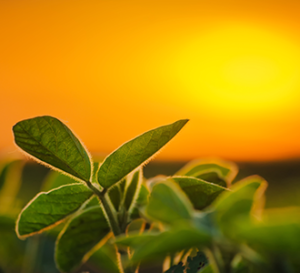 Rain finally hit most parched areas of the U.S. Corn Belt, though it did not provide much help to the Crop Watch fields that are too far along at this point; later-planted fields in those areas did benefit somewhat from the much-needed moisture, however; harvest may be on tap this week for the Kansas corn and Iowa soybeans; drier than normal weather is expected across most of the Corn Belt in the next couple of weeks, which will be favorable for the start of harvest.

Global ethanol production is expected to be 20% lower this year as the market goes through the COVID-19 crisis, while recovery in output back to pre-pandemic levels will not be realized until 2022, a director for the U.S. Grains Council said; about 23 billion litres of ethanol production has been lost in 2020, which has shuttered more than 250 ethanol plants across the globe; U.S. ethanol production, however, has nearly recovered from the worst of the pandemic and is currently 10% lower compared with the levels for Aug. 16, 2019; beyond 2020, policy implementation will remain a key factor for ethanol demand

The Trump administration said on Monday it rejected scores of requests from U.S. oil refiners for waivers that would have retroactively spared them from their obligation to blend biofuels like ethanol into their fuel, delivering a win for farmers and a blow to the oil industry just ahead of the November presidential election.

Farmers from the U.S. Southeast, primarily those growing crops like cotton or sorghum, received larger trade aid payments from the federal government in 2019 than those in other parts of the country, a government watchdog agency said; President Donald Trump’s administration rolled out various subsidy schemes to compensate farmers for lost sales during a tariff war with China, and the programs were frequently criticized for favoring some farmers over others.

China will auction another 20,000 tons of frozen pork from its state reserves on Sept. 18, the China Merchandise Reserve Management Center said; the world’s top pork consumer has already sold 550,000 tons of the meat from its reserves this year.

Brazil will export 82.5 million metric tons of soybeans next year, the same amount as in 2020, according to a forecast by agricultural consultant Safras & Mercado; in August, the group had forecast sales abroad of 83 million tons in 2021, and estimated exports this year would reach 81 million tons

Russian wheat export prices rose for the third week in a row, supported by strong demand from major importers such as Turkey, analysts said; Russian wheat with 12.5% protein loading from Black Sea ports and for supply in September was at $224 a ton free on board (FOB) at the end of last week, up $8 from the previous week, agriculture consultancy IKAR said; prices rose further on Monday and reached $227; Sovecon, another Moscow consultancy, pegged wheat up $8 at $222 a ton at the end of last week.

The U.S. Department of Agriculture (USDA) has kept its forecast for Kazakhstan’s wheat harvest in 2020-2021 at 12.5 million tons; according to the September report, exports will remain at 6.3 million tons and imports at 200,000 tons; the wheat ending stock for July 1, 2021 is projected at 0.89 million tons.

Soft wheat exports from the European Union and Britain in the 2020/21 season that started on July 1 totaled 3.57 million tons by Sept. 13, official EU data showed; that was 42% below the volume exported in the previous 2019/20 season

Soybean imports into the European Union and Britain in the 2020/21 season that started on July 1 totaled 3.02 million tons by Sept. 13, official EU data showed; that was 3% above the volume imported in the previous 2019/20 season

—The ministry left unchanged its forecast of 2020 grain maize output, not including seeds, at 14.1 million tons and cut projected barley production to 11.0 million tons from 11.3 million seen last month.

The European Union’s crop monitoring service MARS further cut its yield outlook for summer crops in the 27-member bloc on Monday, citing drought conditions in parts of Europe; MARS now sees the average EU grain maize yield at 7.83 tons per hectare (t/ha), down from its forecast last month of 8.01 t/ha; that is still 3.3% above the five-year average.

An outbreak of African Swine Fever threatens to keep German pork locked in the European Union with China, South Korea and Japan all banning shipments, a major setback in an already challenging year for meat producers following COVID-19 outbreaks at plants.

Australia on Tuesday lowered its forecast for barley exports during the 2020/21 season by around 6% after China imposed a tariff that effectively ended the billion-dollar trade between them; the Australian Bureau of Agricultural and Resource Economics and Sciences (ABARES) said barley exports during the 2020/21 season will total 6.155 million tons, down from previous estimate in June of 6.55 million tons.

Leading global wheat buyer Egypt has raised purchases by almost 40 percent year on year in the first two months of its buying season, with its supply ministry still instructed to keep six months of strategic reserves in response to COVID-19; between July and August, Egypt bought 2.4 million tons of wheat from international suppliers compared with 1.72 million tons purchased during the same period last year; in light of instructions by the political leadership we are keeping a strategic reserve of no less than six months of essential goods,” the ministry said.

Palm oil prices may decline in the next few months as yields and output increase due to better weather conditions and seasonal factors, Fitch Ratings said; Malaysian benchmark crude palm oil spot prices have averaged around $645 a ton so far in the third quarter and around $600 a ton year-to-date; Fitch Ratings didn’t provide a forecast for price; yields are gradually picking up due to higher rainfall since late last year.