by Stephen Platt and Mike McElroy

The petroleum complex traded in a mixed fashion with both gasoline and distillate showing strong gains while crude traded on both sides of unchanged before settling modestly higher. Early support to crude was apparent following the suspension of gas exports by Russia to Poland and Bulgaria following their refusal to pay in rubles. Strength in crude could not be sustained as active buying of the cracks continued reflecting heavy overseas demand for US products, while the weakness also reflected the rising US dollar and continuing concerns over the strength to the Chinese economy due to COVID lockdowns in Beijing and Shanghai. Fears have been exacerbated by the potential that economic growth in Europe could be depressed as strong moves away from oil and gas take place, especially in Germany.

Whether the weaker demand outlook will be enough to offset the contraction in Russian supply availability in the months ahead continues to be a key consideration. Germany has moved quickly to decrease its reliance on Russian oil, reducing the proportion imported from 35 percent to 12 percent, with the remaining portion attributable to Rosneft, whose German refinery is changing from Russian control at the urging of the German government. Some forecasts see Russia’s oil output falling by 17 percent in 2022 as Western sanctions limit exports of crude and products to between 8.7 and 9.5 mb/d.

The DOE report showed commercial crude stocks rising by .7, with 2.9 mb withdrawn from the SPR. Gasoline inventories fell by 1.6 mb and distillate were off by 1.4. The declining level of distillate inventories continues to strengthen the 2-oil crack, with the June rising to $63.15 per barrel today, up over 10.00 from just last week. Refinery utilization at 90.3 was a decline of .7 percent from the prior week. Product supplied rose to 19.8 mb from 19.0 in the prior week although the surge was primarily attributable to other oils. 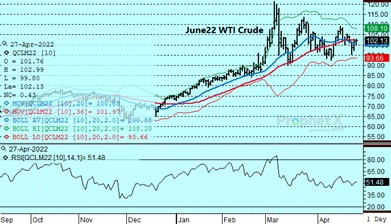 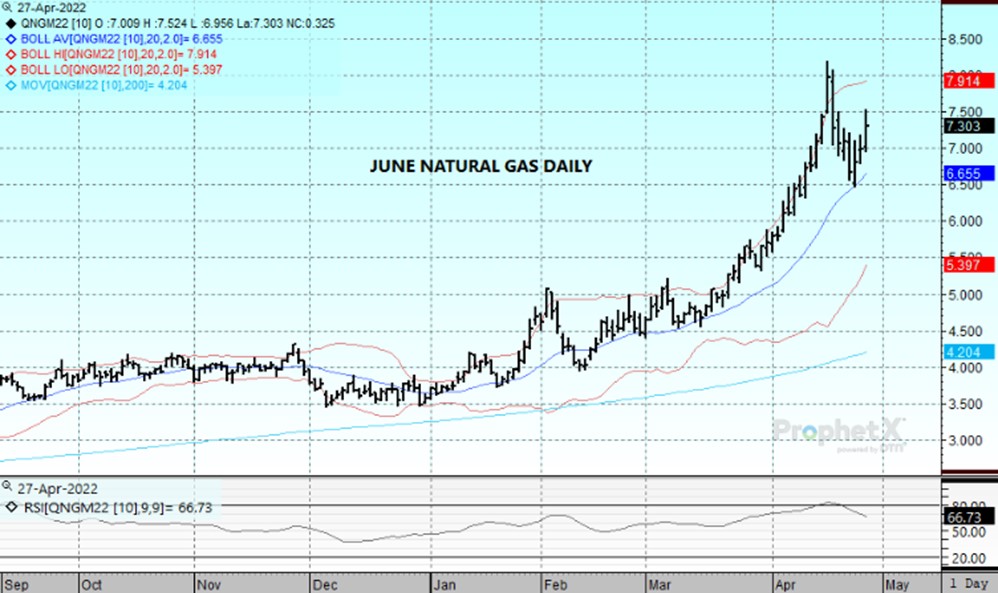 The turnaround that started Monday has seen solid followthrough, with gains of 17 cents yesterday followed up today with another 36 cent jump as the June settled at 7.339.  The key driver was Gazprom’s halting of exports to Poland and Bulgaria due to their unwillingness to pay in rubles, further ratcheting up tensions in the region.  Continued US production losses supported the move, with output dropping under 91 bcf following severe weather over the weekend and pipeline maintenance in the Appalachian region. LNG flows worked back to 12.9 bcf today and added to the upside bias.  Estimates for tomorrow’s storage report point to a build of 38 bcf verses the 5 year average of 53.  The 7.50 level held up to its first test today, with not much resistance above there until the recent highs above 8.  The 7 dollar area now offers initial support, and below there in the vicinity of Monday’s low near 6.50.

The authors of this piece do not currently maintain positions in the commodities mentioned within this report.

Learn more about the Aug 12 2022 USDA supply/demand report with Steve Freed written and video analysis as well as our USDA Report Infographic.

A Bit Hit in Pork Cutouts