Overnight trade has SRW Wheat down roughly 3 cents, HRW unchanged; HRS Wheat up 3, Corn is unchanged; Soybeans up 3;  Soymeal up $1.50, and Soyoil up 30 points.

U.S. Weather Forecast: Last evening’s model run led to precipitation changes from Monday through Oct. 30. This put meaningful precipitation back into the southwestern Hard Red Winter Wheat Region and West Texas for Monday into Tuesday. The midday European model run was wetter in these two areas than this evening’s GFS model.

South America Weather Forecast: South America will still have improvement of weather over the next two weeks. A rain event is still expected to impact a majority of Argentina with meaningful moisture Saturday through Sunday. In Brazil, conditions will involve a mostly favorable mix of rain and sunshine. Some localized pockets in an area from Rio Grande do Sul through Parana will miss out from much rain in the first week of the outlook and will be in need of greater moisture in the second week.

Wire story reports it is no surprise that Brazil is nearly out of soybeans given its extraordinary export pace earlier this year, but consistent with the bizarre nature of 2020, it is possible that Brazil could purchase beans from its export rival, the United States; that has never happened in modern times, especially since Brazil emerged last decade as the world’s top exporter of the oilseed; but neither U.S. nor Brazilian agencies seem to think Brazil will start importing U.S. soybeans, at least in the short term; Brazil’s government over the weekend announced the temporary suspension of the 8% import tariffs on corn and soybeans from outside the Mercosur trade bloc to help reduce food prices that are pushing up inflation.

—Data released by the EIA Wednesday showed that both US ethanol production and ethanol inventories are down from the previous week — which is being seen by some grains traders as a possible sign of states amping up their restrictions to limit a resurgent spread of coronavirus during this year’s flu season; President Trump promised that there would not be another national shutdown, but some high-driving states are threatening localized shutdowns that risk seeing lower ethanol demand at least partially offset the strong export demand that we are seeing this year,” says StoneX

A group of U.S. Republican senators asked the Environmental Protection Agency on Wednesday to consider a general waiver that would prevent an increase in biofuel blending obligations next year for oil refiners hit by a collapse in fuel demand because of the coronavirus pandemic.

As a grain trade conference ended on Wednesday in east China’s Fujian Province, purchase agreements for 36.17 billion yuan (about 5.44 billion U.S. dollars) worth of various grain products had been signed; the third China Grain Trade Conference drew delegations from 31 provinces, municipalities and regions, and over 2,600 enterprises to the city of Fuzhou, the provincial capital; the three-day event was held both online and offline; the online platform saw 10.3 million tons of various cereals and oils traded, with transactions totaling 29.24 billion yuan; the previous sessions of the China Grain Trade Conference were held in northeast China’s Harbin City and central China’s Zhengzhou City, which saw a total of 33 million tons of grain and oil traded, with turnover exceeding 70 billion yuan.

The United States and China dealt with the spread of the devastating coronavirus pandemic in vastly different ways, and that split is reshaping the global battle between the world’s two leading economies; about 11 months after the Wuhan outbreak, China’s official GDP numbers this week show not only that the economy is growing, up 4.9% for the third quarter from a year earlier, but also that the Chinese are confident enough the virus has been vanquished to go shopping, dine and spend with gusto; China’s total reported death toll is below 5,000 and new infections are negligible, the result of draconian lockdowns, millions of tests, and strict contact tracing that set the stage for an economic rebound. 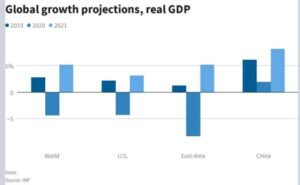 Brazilian food processor BRF SA will stop production at a Halal chicken plant in the south of the country starting Nov. 16 for modernization work, the company said; the halt was reported in the local press and later confirmed by BRF, which said the work will be complete by Dec. 5; the objective of the measure is to adapt production to market demand.

Russia has harvested 130.9 million tons of grain before drying and cleaning from 94% of the area with an average yield of 2.89 tons per hectare, data from the agriculture ministry’s analytical center published

Analysis of late-season satellite imagery cuts 2020/21 Ukraine corn yield and production by 7% to 32.5 [28.0–41.9] million tons (mmt). National corn yield is now seen at 6.32 tons per hectare, with significant reductions in major producing oblasts, such as Poltava and Kirovorad (both down by ~1 ton per hectare). Ukraine harvested area is maintained at 5.1 million hectares, although reductions are possible as impacts of this season’s drought are better quantified.

Euronext wheat ended flat on Wednesday, consolidating near contract highs as traders monitored dry weather in several exporting countries and awaited the outcome of an Algerian tender expected to yield fresh sales of European Union wheat; December milling wheat settled unchanged on the day at 211.25 euros ($250.82) a ton; on Tuesday it rose to 214 euros, a life-of-contract record and the highest spot price  since August 2018, before closing slightly lower.